Random news from around the world

Posted on November 3, 2011 | Comments Off on Random news from around the world 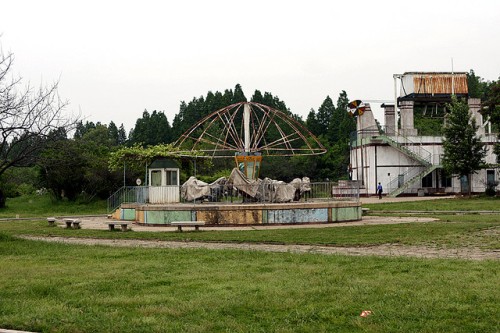 1. Want to see pictures of North Korea’s rusting, dilapidated amusement park. Apparently the government has to bus in a few loads of forced patrons just to keep the park from being absolutely empty. Full story here.
2. Barry Deley, a British-Columbian sports anchor, wins a house worth $2.5 million live on the air. When the winning name is drawn, it quickly dawns on the news team that it’s their own sportscaster. Watch video.
3. This is worth another mention. Check out this funny collection of dating videos from the 80s.
4. Options for Bunker Living. I’ve always wondered where they park their car? Story here.

4. I love this story about a guy named Taylor Baldry who thinks we have forgotton how satisfying it is to have fce-to-face conversations with people. He recently set up a table and chairs at Lake Calhoun with a sign that read “Free Conversations.” He has a menu board of topics he’ll discuss with you. For more than 2 1/2 hours, the folding chairs were never empty. (full story)
5. I love tree houses! I have never had one, but I think I want to build one someday. Maybe I’ll hire German treehouse design firm Baumraum to build it. Then I could have something like this!

6. Metal Detector: While rarely heard on the Auto-Tuned airwaves, heavy metal has been ascending in popularity in recent months. Check out some of the new bands paving the way. Read more…

Listen to them here: http://www.brooklynvegan.com/archives/2011/08/listen_to_new_f.html#more