101 Places To Get F*cked Up Before You Die

Looking for a guidebook that isn’t full of tired, lame, or even BS travel information? 101 Places to Get Fucked Up Before You Die brings together the most irreverent and legit accounts of drinking, nightlife and travel culture around the world. Part guide, part social commentary, part party invitation, 101 Places gives you all the info and inspiration you’ll need to:

Do you really know where to go out in San Francisco or Tel Aviv? How about preparing for Burning Man or Oktoberfest? The award-winning journalists and photographers at Matador Network let you know what’s up at each spot, whether it’s drug policies, how to keep safe, special options for LGBT travelers, or simply where to find the kind of music you like to dance to. No matter if you want to rage at Ibiza or just chill on some dunes smoking shisha, 101 Places has something for you.

Reading a book with no pictures to a bunch of kids would be a disaster right? Wrong.

Posted on October 16, 2014 | Comments Off on Reading a book with no pictures to a bunch of kids would be a disaster right? Wrong. 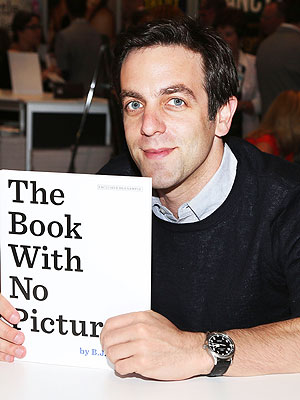 This video shows actor B.J. Novak reading his new book, The Book With No Pictures, to a crowd of children. You might think that kids would not stand for this, but you’d be wrong. Words can be amazingly entertaining. We need to give our little ones more credit. Nice work Mr. Novak. Buy it here.

Comments Off on Reading a book with no pictures to a bunch of kids would be a disaster right? Wrong. 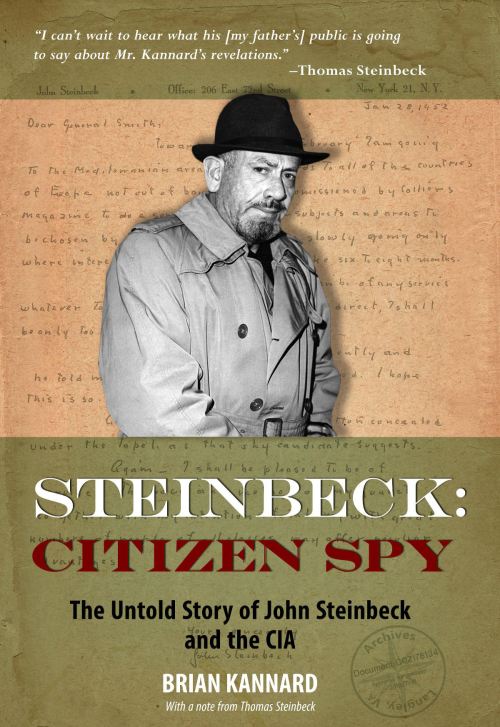 In the first half of the program, author Brian Kannard detailed his research into the life of John Steinbeck and how that investigation revealed that the famed writer may have secretly worked as a spy for the CIA. Kannard recalled that, while studying Steinbeck’s interest in Arthurian legend and Holy Grail lore, he serendipitously discovered that the author had secretly worked for the OSS during World War II. Although Steinbeck was allegedly a war correspondent during the conflict, Kannard revealed that the author was also part of a “prototype SEAL unit” called the Beach Jumpers. Following the war, when the CIA was in its infancy, Kannard said, they turned to patriotic celebrities, such as Steinbeck, who could gain access to areas and information abroad that “the average tourist wouldn’t have.”

Although Steinbeck was considered extremely liberal and possibly a communist, Kannard observed that the author, unlike his contemporaries in the arts, was never called before the House Committee on Un-American Activities. Citing a letter written by Steinbeck where the author expressed certainty that he would never be called to testify, Kannard surmised that this confidence was due to protection afforded to him via his work with the CIA. Based on his research, Kannard theorized that Steinbeck worked for the CIA at least until 1964, when he visited the Soviet Union, and possibly even later when the author traveled to Vietnam “at the behest of Lyndon Johnson.” Interestingly, while much of Kannard’s work is informed by FOIA documents, he noted that the FBI destroyed numerous files concerning Steinbeck, which suggests that the government wanted to conceal something about the author’s past.

via Coast to Coast AM

Cast the role of John Steinbeck when they make a movie out of this.

Comments Off on Steinbeck a Spy?

1. “The Round House” by Louise Erdrich: Likely to be dubbed the Native American “To Kill a Mockingbird,” Erdrich’s moving, complex and surprisingly uplifting new novel tells of a boy’s coming of age in the wake of a brutal, racist attack on his mother.
2. “The Yellow Birds: A Novel” by Kevin Powers: With this compact and emotional debut novel, Iraq War veteran Powers eyes the casual violence of war with a poet’s precision, moving confidently between scenes of blunt atrocity and almost hallucinatory detachment.
3. “Gone Girl: A Novel” by Gillian Flynn: Masterfully plotted from start to finish, the suspense doesn’t waver for one page. It’s one of those books you will feel the need to discuss immediately after finishing. The ending punches you in the gut.
4. “The End of Your Life Book Club” by Will Schwalbe: As much an homage to literature as to the mother who shared it with him, Schwalbe’s chronicling of his mother’s death to cancer—they wait, they talk, they read together—is nothing less than captivating.
5. “Billy Lynn’s Long Halftime Walk: A Novel” by Ben Fountain: Debut novelist Fountain follows a squad of marines as they engage in a “victory tour” in the States. Set mostly during halftime at a Dallas Cowboy’s football game, Fountain skillfully illustrates what it’s like to go to war, and how bizarre and disconcerting it can be for these grunts to return from combat to the country they love.
6. “Behind the Beautiful Forevers: Life, Death, and Hope in a Mumbai Undercity” by Katherine Boo: This searing portrait of life in a Mumbai slum reads like a novel, but it’s all-too-true. Pulitzer Prize-winner Boo’s writing is superb, and the depth and courage of her reporting from this hidden world is astonishing.
7. “A Hologram for the King” by Dave Eggers: Both disturbing and funny, this novel from onetime wunderkind Eggers shows surprising depth. A man’s wayward attempt to find himself and retake his life delivers him to Saudi Arabia but the journey abroad is also internal, and it ends up saying as much about life in America as in the Middle East.
8. “The Middlesteins: A Novel” by Jami Attenberg: A quick read that’s more complex than it seems at first, this story about a Midwestern Jewish family is both recognizable (sometimes uncomfortably so) and entertainingly idiosyncratic.
9. “Mortality” by Christopher Hitchens: Like the late author himself, this book is funny, smart, entertaining and unflinching to the end. “Mortality” has the power to change ideas that you might have held immutable—which is one of the best things you can say about a book.
10. “The Fault in Our Stars” by John Green: This soulful novel originally written for teenagers tackles big subjects—life, death, love—with the perfect blend of levity and heart-swelling emotion.

Have you read any of these books? What did they miss?

Buy any of these books on Amazon here.

The story
An invaluable CIA asset has gone missing, and with him, secrets that in the wrong hands could prove disastrous. The only question is: Can Mitch Rapp find him first?

Joe Rickman, head of CIA clandestine operations in Afghanistan, has been kidnapped and his four bodyguards executed in cold blood. But Mitch Rapp’s experience and nose for the truth make him wonder if something even more sinister isn’t afoot. Irene Kennedy, director of the CIA, has dispatched him to Afghanistan to find Rickman at all costs.

Rapp, however, isn’t the only one looking for Rickman. The FBI is too, and it quickly becomes apparent that they’re less concerned with finding Rickman than placing the blame on Rapp.

With CIA operations in crisis, Rapp must be as ruthless and deceitful as his enemies if he has any hope of finding Rickman and completing his mission. But with elements within his own government working against both him and American interests, will Rapp be stopped dead before he can succeed?

Comments Off on New Vince Flynn book out November 2012 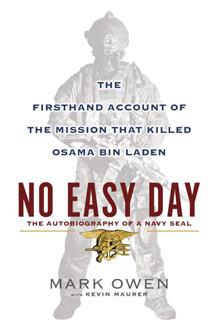 It gets released on Sept. 11th.

The SEAL, who Fox News surprisingly outed, is likely gonna face another tough mission – avoiding legal trouble. The Pentagon has not vetted the account or authorized the book.

Not completely sure how I feel about this. It feels kinda wrong for a SEAL to write a book and profit from the mission while the others who were with him that night gain nothing. They should have written it together or not at all.

Still, I will probably buy this book.

Amazon’s description:
Start your Ghetto Gourmet adventure with some “Soul Rolls,” follow-up with “Finger-Lickin’, Rib-Stickin’, Fall-Off-the-Bone-and-into-Your-Mouth Chicken,” and finish off with “Banana Ba-ba-ba-bread” sweetened with golden honey. Chapters such as “How to Become a Kitchen Pimp,” “Chillin’ and Grillin’,” and “Pasta Like a Rasta” will guide you through creating 5 star meals at a 1 star price. You can’t find fusions like Blasian (black Asian) or Ghettalian (ghetto Italian) in restaurants, but you can have them cooking away in your kitchen faster and easier than ordering takeout.

I wonder if he has any recipes for cooking crack?

Comments Off on Coolio: The Ghetto Gourmet

172 Hours on the Moon is a young adult novel by Johan Harstad about three teenagers who go to the moon as winners of a global lottery, only to discover a terrible secret about why they were sent. Buy a copy here. 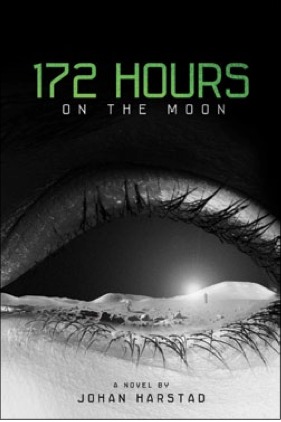 Seems interesting. A review of it has been posted here.

Comments Off on 172 Hours on the Moon

In Vince Flynn’s latest page-turner, the stakes are higher than they’ve ever been as Mitch Rapp embarks on the journey that will turn him into America’s most deadly asset. Flynn is known for delivering shockingly realistic situations in his political thriller / assassin books. Every detail and protocol appears to be extensively researched and accurate. Something us mystery/espionage fans appreciate.

His latest book is called Kill Shot. It is hitting stands today. The book is actually a prequel to his later books and follows the story of how Mitch Rapp became the CIA’s superagent.

Exerpt from Simon and Schuster: In the year since the CIA trained and then unleashed him, Mitch Rapp has been steadily working his way through a list of men, bullet by bullet. With each swift and untraceable kill, the tangled network of monsters responsible for the slaughter of 270 civilians in the Pan Am Lockerbie attack become increasingly aware that someone is hunting them. Rapp is given his next target, and finds the man asleep in his bed in Paris. In the split second it takes the bullet to leave Rapp’s silenced pistol, the trap is sprung and he finds himself in the fight of his life.

Posted on January 5, 2012 | Comments Off on American Sniper

Chief Chris Kyle was a Navy Seal for ten years. He served four combat tours in Iraq, earned numerous medals, saved countless lives and accomplished more than most men walking around in this great country ever will. He has now retold his experiences in the new autobiography “American Sniper,” which hit store shelves today. Buy here if you are interested.

Comments Off on American Sniper