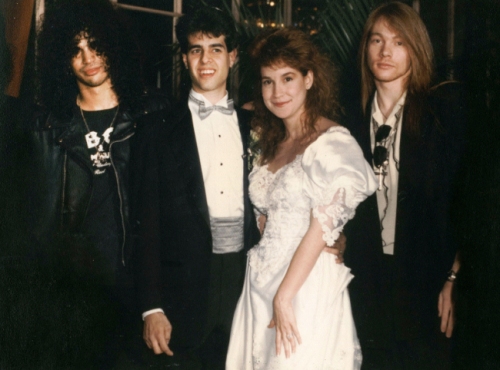 Marc Canter and his bride center

A short documentary about one man’s plan to get Guns N’ Roses back back together. Growing up best friends with Slash and Axl, Marc Canter had a front row seat for the rise and fall of one of the greatest rock bands of all time. Nearly thirty years later, if anyone knows what it will take to get them back together it’s him. A childhood friend of Slash, Canter was around during the formative years for one of the most iconic rock bands of all-time, writing about that time of his life in Reckless Road: Guns N’ Roses and the Making of Appetite for Destruction.

This is part 1 of 3 in a series that will be unveiled over the next two weeks by UPROXX. 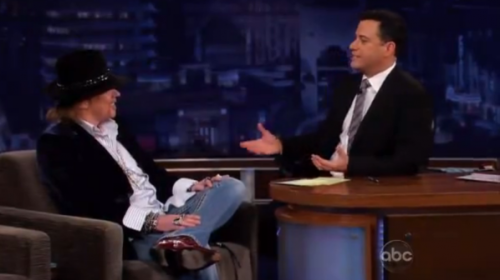 Photo via Consequence of Sound

In case you missed it last night.

Dude, I have knots in my stomach over this induction.

Besides hating the fact that Green Day are inducting Guns N’ Roses at the Rock and Roll Hall of Fame ceremony this Saturday, I now have to wait on Axl AGAIN to not crush my hopes for a reunion.

The hopeful part of my heart wants Axl to show up, scream, and completely destroy the naysayers by melting the hipster glasses right off their faces with a crushing performance of Sweet Child O’ Mine, while ushering in a new wave of hair metal to fill the void of good music we live with today.

The blackened, cynical part of my heart understands that Axl will probably let us down again.

Slash thinks so too. In an interview with Rolling Stone, Slash said that Axl hates him and that a reunion performance is not likely. Then again, if you read the Slash autobiography, you’ll learn Slash is deeply scarred by his relationship with Axl. A psychiatrist could write a book on how mental Slash and Axl really are.

Do you think Guns N’ Roses will reunite and perform on Saturday?

Comments Off on Slash: “Axl Hates My Guts”

Take me down to the Paradise City where the music was good and not as shitty. I miss the 80s. Listen to the Guns N’ Roses song here.