From Gizmodo: This is Michael Baker. Michael is 20 years old, lives in Kentucky, and likes The Bucket List on Facebook. I know these things because Michael has not activated his Facebook privacy settings, which is something that’s recommended in most cases but absolutely essential if you’re going to post pictures of yourself stealing gas from a cop car on your wall.

The theft occurred last month, according to The Smoking Gun; that’s when Baker raised his middle finger at his girlfriend’s camera while slurping up gas from a Jenkins City police cruiser. He was arraigned yesterday in Letcher County District Court.

Baker has since taken down the incriminating photo, as well as a few updates he had apparently left along the way (sample: “yea lol i went too [sic] jail over facebook.”). Which, yes, lol indeed. 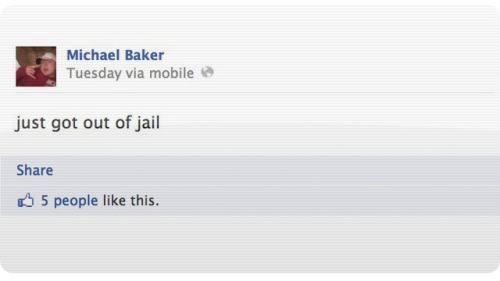