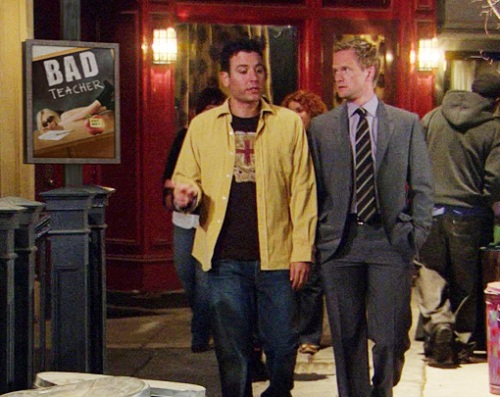 The Bad Teacher poster in the second photo (below) with Ted (Josh Radnor) and Barney (Neil Patrick Harris) was added to a lamp post that was already in the scene.

Why does this 2006 episode of How I Met Your Mother include an ad for the 2011 movie Bad Teacher? Because it can. Technology is advancing in the advertising world. A company called SeamBI (Seamless Brand Integration) can inject new ad units into the content of old syndicated shows. They do this by digitally altering scenes of old TV show episodes with new products and brands. If there is an appropriate space for an ad naturally in the shot (i.e. billboard or TV in the background), they use that space. If no natural space exists, then one is created. The plasma hanging in the background in this photo was digitally rendered and added  into the shot. The original airing never had a TV on the wall. 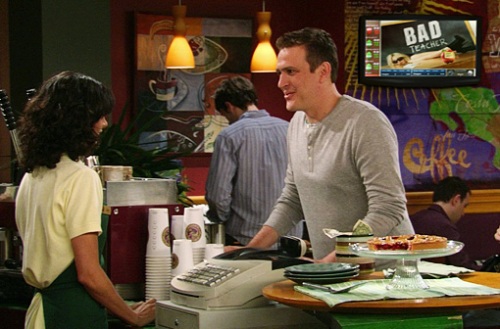 In the coffee shop scene with Marshall (Jason Segel) above, the plasma TV screen was inserted

Not sure where I stand on this. I think it would be distracting to be watching a rerun of My Name is Earl and see an iPad ad on the screen behind Crabman. Advertisers know that people are fast-forwarding through the ads though, so product placement is becoming more important. (via ADWEEK)