Posted on March 26, 2012 | Comments Off on A dead truck driver and bananas everywhere 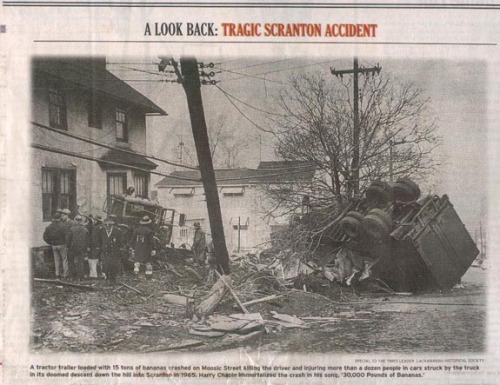 It was on March 26, 1965 that a young truck driver, delivering a load of bananas to Scranton, PA lost control of his vehicle, and careened into town at 90 miles an hour, spilling bananas all along the way. The incident, which unfortunately ended in the driver’s death, inspired the Harry Chapin song, 30,000 Pounds of Bananas.

A 35-year-old truck driver, Gene Seski, was on his way to deliver a load of bananas to Scranton, Pennsylvania. He was returning from the boat piers at Weehawken, New Jersey where he picked up his load. While the exact information is somewhat lost in time, the load was clearly destined for the “wholesale block” on the western edge of Lackawanna Avenue in Scranton, the local A&P Warehouse or to Halem Hazzouri Bananas, the premier banana purveyor in the area at the time. Seski was driving a 1950s Brockway diesel truck tractor with a 35-foot semi-trailer while and was headed down Rt. 307 when he suddenly lost control. The “two-mile” descent extends from Lake Scranton down to the bottom of Moosic Street (a 500-foot drop in elevation in little more than a mile). The truck eventually crashed at the southwest corner of Moosic St and S. Irving Ave. For some reason, the truck cruised into Scranton at about ninety miles-per-hour, sideswiping a number of cars before it crashed, killing the driver and spilling bananas everywhere when the rig came to rest.

Imagine coming across that accident and seeing all of those mashed bananas.

Click here for other stories about large food spills.

Comments Off on A dead truck driver and bananas everywhere