Posted on September 26, 2013 | Comments Off on Money from Zach Sobiech’s ‘Clouds’ presented to U of MN cancer fund 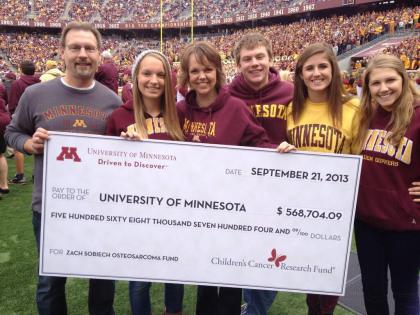 Sobiech is the Lakeland teenager whose song “Clouds” became an Internet sensation shortly before he died of cancer in May at age 18. His family presented a check to the U of MN cancer fund in the amount of $586k at the football game last weekend. Proceeds from the sale of Clouds and YouTube views of the viral video are donated to the Zach Sobiech Osteosarcoma Fund via the Children’s Cancer Research Fund.

Days after his death, “Clouds” became the No. 1 rock song in the country, according to Billboard magazine. It also reached No. 1 on iTunes — and stayed at the top of the charts for four days.