Posted on November 9, 2015 | Comments Off on Rumblr – A new app for those who want to fight random people 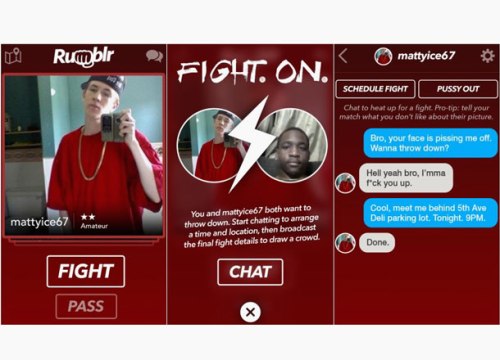 Dude on the left looks like he needs to get his ass kicked.

Walking around with a chip on your shoulder? Maybe you took a few lessons at National Karate and want to try out some “real-world scenarios.” Maybe you had a few beers while listening to Limp Bizkit and just want to break something.

Users get a profile pic and list their stats, including “MMA specialty,” to potential matches.

The app also features a chat function allowing users to “heat up” after arranging a fight and a filter for female and group fights. Video technology also allows people to broadcast a fights’ location so others can gawk – or perhaps become accessories to – the action.

This should go smoothly…