Did this really happen?

At the Canucks Fan Zone, blogger Derek Jory asks the questionwhether the following photo, ostensibly from 1984, is real: 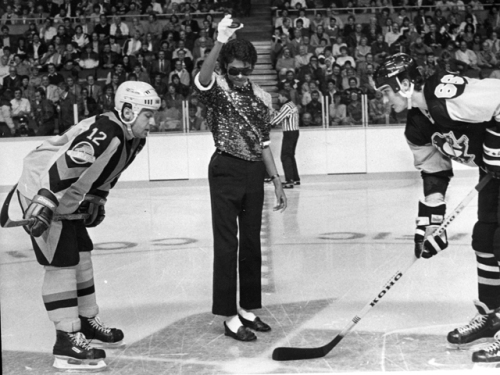 It’s a pre-game faceoff between Stan Smyl and Mario Lemieux, with Michael Jackson  doing the honors. Jory asserts that there is actually a confluence:

The Canucks hosted the Pittsburgh Penguins at the Pacific Coliseum on November 16, 1984 and beat them 7-6.
Michael Jackson’s Victory Tour stopped in Vancouver to play three shows on November 16, 17 & 18 at BC Place.

It’s possible this is the correct date. 1984 was Lemieux’s first season in the NHL, and (there is no C on his sweater) was not yet captain of the Penguins.

On the contradicting side, Jory also points out that there’s “no red carpet” as there is in this photo. However, if you look behind Michael Jackson, you’ll notice the penalty box. The red carpet typically extends from the players’ benches for these sorts of things, since the penalty boxes and scorekeeper’s bench do not have exits, and those benches are clearly behind the photographer. Furthermore, the photog is clearly standing on the ice, and for safety reasons would only be standing on carpet himself… so just because you don’t see the carpet doesn’t mean it’s not there.

The real answer is that it was a look-alike. See this story here.